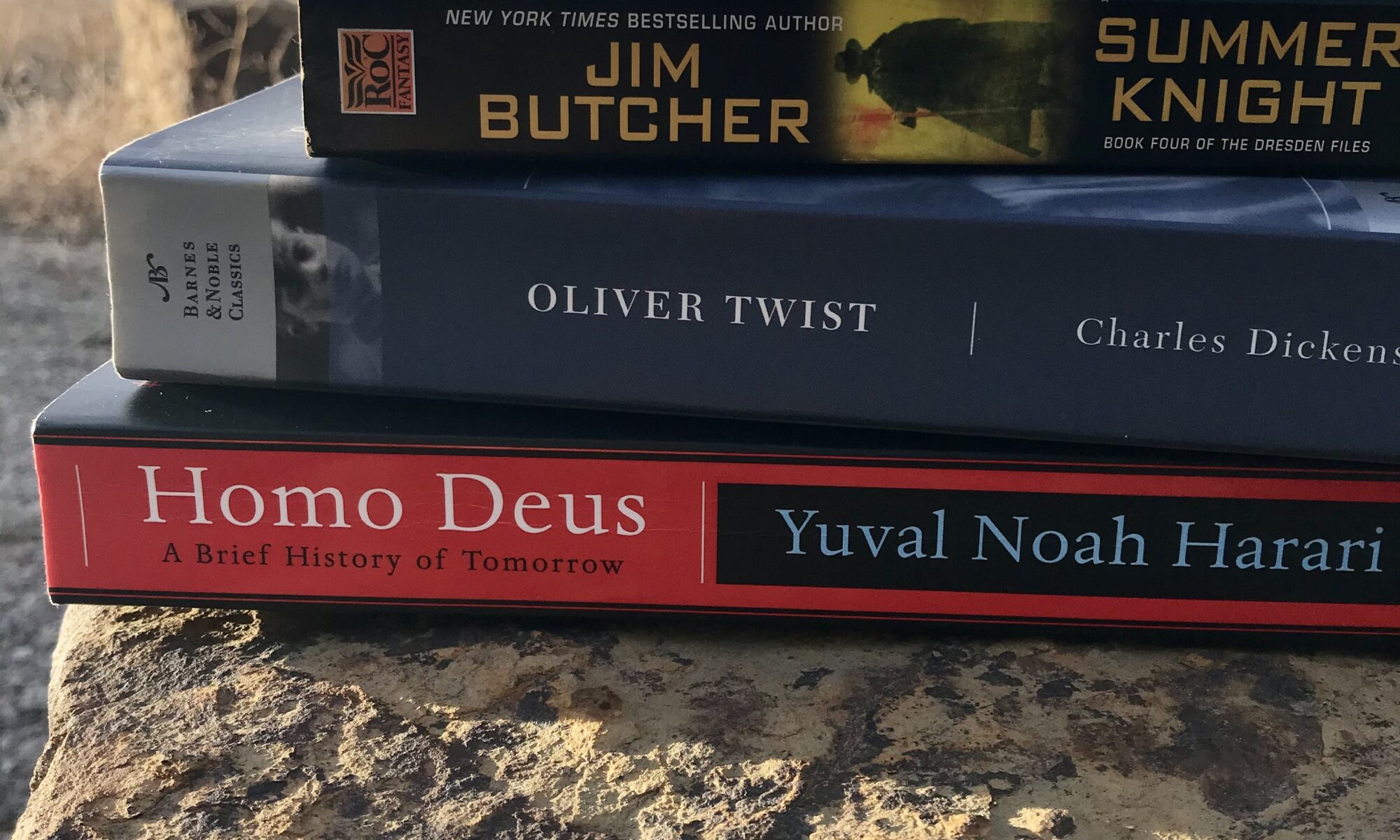 Number of books reread this year: 9 (from June -December)

Number of books by women and nonbinary people read this year (only including new books read): 49

Number of books by BIPOC read this year (only including new books read): 22

First book of the year: Equal Rites by Terry Pratchett

Last book of the year: Summer Knight by Jim Butcher

Best books of the year (because I can’t chose one):
Utopia Avenue by David Mitchell
With the Fire on High by Elizabeth Acevedo
The City We Became by N. K. Jemisin
The Goldfinch by Donna Tartt
Ninth House by Leigh Bardugo

A Christmas Carol by Charles Dickens
I really cannot convey how much I love this book. Sometimes classics are classics for a reason. I never get tired of the story and delight in forcing my family to watch every movie adaption, including a filmed stage musical that I was in (I played the first spirit). This year I made everyone listen to Tim Curry’s audio book of it. Delightful. Dickens is definitely at his best in this book.
10/10 bad lobsters in a dark cellar

Empire of Storms by Sarah J. Maas
Book Hangover Alert**
Throne of Glass series book 5 of 7
I’ve been making my way through this series extremely slowly, not because it isn’t good, but because when I finish it, it will be over. Unfortunately, I did wait a little too long between reading book four and reading this one. It took me a minute to remember where we’d left off. But this installment did not disappoint. I don’t think it was my favorite of the series, but we got lots of quality Aelin and Rowan time, which I appreciated.
3.5/5 extremely attractive Fae males

The City We Became by N. K. Jemisin***
Book Hangover Alert**
CW: racism, xenophobia
SO GOOD. It’s an urban fantasy/sci-fi that reminded me a bit of Neil Gaiman’s Neverwhere, except about New York instead of London. This book was about the personification of New York City and multi-dimensional alien threats. Even though I don’t live in New York, I do love the city and I felt the way Jemisin represented each of the boroughs of New York was (*chef’s kiss*) spot on. Her characters were so real and so vibrant and even though there was a lot of the characters standing around and talking, trying to decide what to do, I didn’t mind because I loved the characters. I would have read more of them just chatting to each other honestly. I don’t know if there will be another book, but I really hope so.
5/5 city avatars

Wilder Girls by Rory Power***
Book Hangover Alert**
CW (provided by Rory Power’s website): graphic violence and body horror, gore, on the page character death, parental death, and animal death (the animals are not pets), behavior and descriptive language akin to self harm, and references to such, food scarcity and starvation, emesis, a scene depicting chemical gassing, suicide and suicidal ideation, non-consensual medical treatment.
This isn’t in the content warning, but I also want to acknowledge that this book is about a mysterious and deadly disease and a lockdown, so if that’s not something you want to think about when you’re reading during COVID times, I totally get it. That being said, this book was great. I read it because I saw it on Book Tok and the Tik Tok reviewer said “it’s gay and it slaps.” Reader, she was correct. I loved the style; the characterization was really strong. The prose was spare and still very expressive. I’m definitely ready for book two, so hopefully that’s a thing that’s coming. I also liked the themes of environmentalism and disability that threaded through the novel.
4/5 mutant deer

Oliver Twist by Charles Dickens
CW: anti-semitism, n-word
I always feel like reading Dickens in the winter, but I usually just read one of his Christmas books. This year I thought I’d give Oliver Twist a try. I really liked it. I love the way Dickens critiques the classism and social welfare of his day, and how he does it such an amusing way. The characters are vibrant and I love how neatly all the characters and threads of the story get tied up at the end. Now, that being said, holy anti-semitism, Batman. The character of Fagin is super problematic. I recently watched a Tik Tok video about how anti-semitism is a different kind of oppression because it assumes that Jews are both superior and inferior to white people. There are stereotypes that Jews are misers that control everything, the banks, etc. (superior), and that they’re rat-like parasites who feed off white people (inferior). Fagin perfectly embodies this caricature of the Jew; his hands are described as rat-like claws, his large nose is referenced many times, he is a robber who steals (from white people) to live, but he also controls this whole network of petty thieves that reports to him and he keeps all the best things to sell himself. Dickens, like many writers of this time, also equates physical beauty to goodness and virtue, which I also don’t love; but he does subvert society in other ways, critiquing the church and institutions like workhouses, both of which were supposed to help the poor and didn’t really, and critiquing the classism that kept people from marrying for love, instead choosing status or worrying what other people would think if they didn’t.
3/5 virtuous orphans

Custer Died for Your Sins by Vine Deloria Jr. ***
It’s important to note that this book is a little old, published in 1969. It discusses the state of Indian Affairs, so it’s important to remember its context is the 1960s, however, I’m sure many of the issues covered in the book are not as solved as we would hope 50 years later. This books is a good one to read to learn more about how the government has treated Native Americans from first contact to contemporary times. Though policy is very important, it’s not always the most exciting thing to read about. My favorite chapter was the one on Indian Humor; since Native Americans are usually portrayed as stoic and serious, it’s nice to read about how humor is actually integral to the Native experience.
3/5 anthropologists

Homo Deus by Yuval Noah Harari
My aunt lent this to me in like March, but I’ve finally finished it. What I liked most about Harari’s book was that it was accessible. I’m not someone who knows a lot about science, but the way he writes and explains things made it easy to understand what he was talking about. The premise of the book is kind of a projection of the future and the goals of humans might be after we’ve solved the problems of war, famine, and plague. (LOL the book was written in 2016 and published in 2017; it’s pretty clear we haven’t solved problems like plague yet!) It was really interesting and also a bit scary (thinking about the future often is). Harari makes a strong argument and as someone who doesn’t read a ton of contemporary science and philosophy, most of his points seem sound to me. So I’d recommend also reading this New York Times review, which adds a few grains of salt with which to take Harari’s work.
3/5 micro robots

Summer Knight by Jim Butcher
Dresden Files book 4 of 17
Still trucking slowly through these. No spoilers, because this is book four, but Harry Dresden is still alive. I appreciated that in this book we got to meet some more wizards. I also appreciated that, for a book written in 2002, the White Council is pretty diverse. Now, that being said a lot of the representations are pretty stereotypical, but I’d like to think Butcher got better at it as he went along. Most straight, cis, white men aren’t going to get it right on the first try. So hopefully he’s doing better now, or we have a problem.
3.5/5 malicious faerie queens

***This book is part of my Books for a Social Conscience series! Read The City We Became to learn more about the diversity that makes up New York and America as a whole. Read Wilder Girls to see more queer people represented in YA and to consider environmental and disability issues. Read Custer Died for Your Sins to learn more about Indian Affairs, and Native issues and history.
Reads marked as part of the Books for a Social Conscience series will regularly address topics like race and racism, colonialism and post-colonialism, LGBTQ+ experience, feminism, BIPOC experience, social and political issues, history, identity, class, disability experience, immigration, gun violence, poverty, colorism, environmentalism, and more! The goal of these books is to diversify the stories we’re reading, grow our empathy for those who are different from us, and amplify voices who are often silenced.