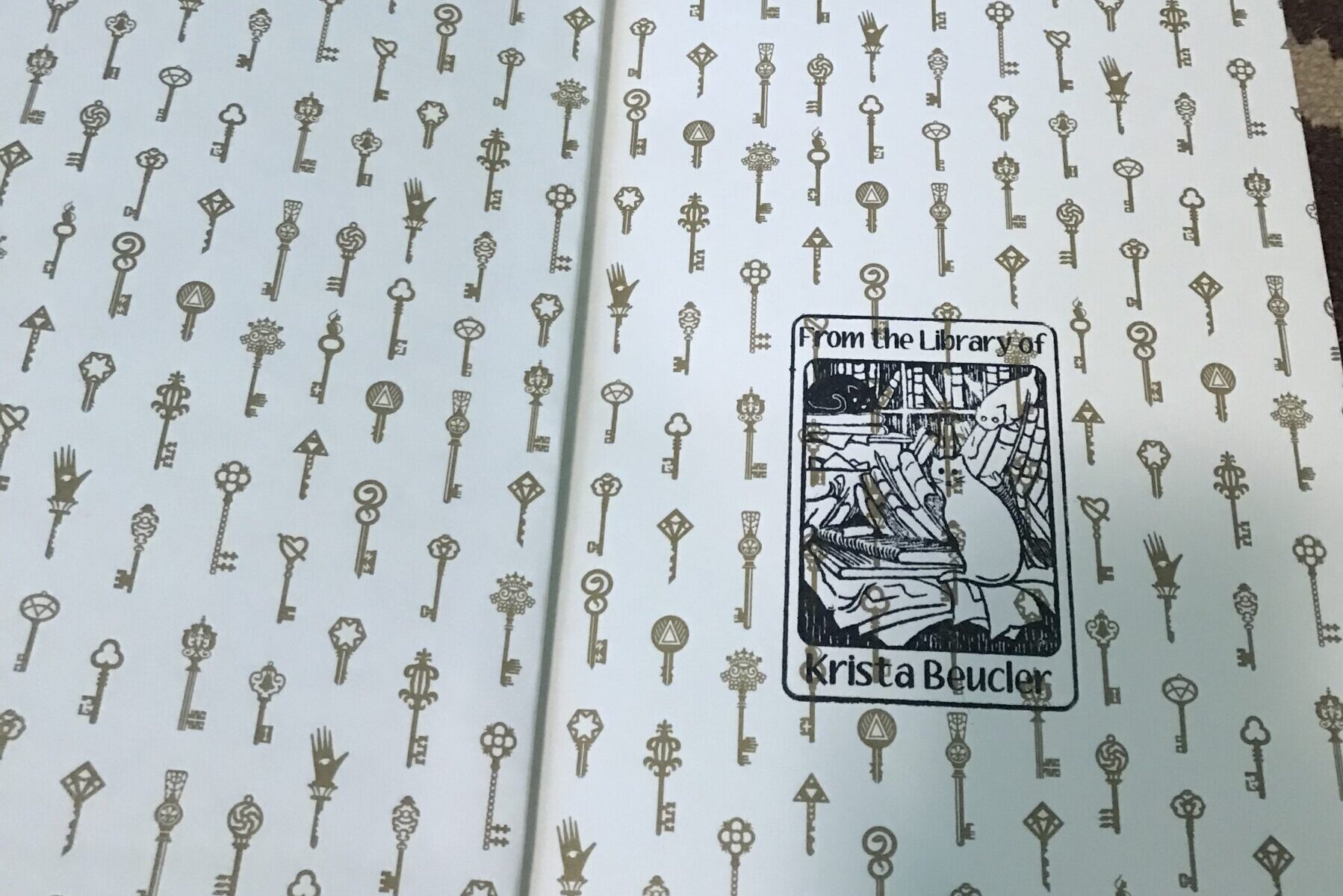 The Starless Sea by Erin Morgenstern
**Book Hangover Alert
I made my parents listen to this when we drove from Colorado to California and they didn’t really know what was going on. This is a nonlinear narrative, which I know some people struggle with. But it’s definitely one of my favorite books. I just adore how the stories are woven together and how all stories are really one story. I also think Morgenstern is a master of creating lush magical worlds for her readers to inhabit. I absolutely loved The Night Circus, her first book, and both the night circus and the harbors on the starless sea are meticulously crafted, gorgeous places that fill me with the same longing that thinking about Narnia or Hogwarts or Neverland make me feel.
10/10 kitchen bees

Ghostwritten by David Mitchell
CW: rape, violence, abusive relationships, racism and xenophobia
Every time I read or reread a David Mitchell book I feel like I have to read all his other books again too. I’m always finding new connections within the book and to his other books. I love how how his characters flit across all his novels. This was only the second time I’ve read this one, so I was excited to read it again and jog my memory. It’s not my favorite of his books but it definitely still has those elements of interconnection that are my favorite part of his work. I listened to the audio book this time and while there was nothing wrong necessarily with the narrator, I do wish they had done multiple narrators. Each section of the novel has a different POV character so it would’ve been nice to have a different narrator for each one. I also didn’t feel like the Night Train section worked with the narrator they chose; that section is almost entirely dialogue with no tags and I didn’t feel like the narrator managed to change his voice enough for each of the speakers.
4/5 backpackers

The Midnight Library by Matt Haig
CW: suicidal ideation, suicide attempt (unsuccessful), emotional abuse, drug and alcohol abuse, overdose
This is a pretty new book which was hyped and recommended to me, and I think made the Amazon bestsellers list. I thought it was very disappointing. Interesting concept but poor execution. Boring and predictable. A bit like The Five People You Meet in Heaven, but not good. I’ve made an effort to read books by more diverse authors so I haven’t read many books by white men lately, but this book just screamed that it was written by a white man who was used to being successful without having to strive for more than mediocrity. (I feel like that was harsh, but I also feel like it was true.) I also want to talk about ableism with this book. The premise is that the main character (whose name I’ve already forgotten) ends up in this Midnight Library which is filled with all the alternative lives she could have lived if she had made different choices. The lives were super predictable for one thing, but also Haig fails to recognize that every one of us is one accident away from being disabled for life. We never get to see a life where the main character deals with a physical disability (though she does have depression and anxiety). Haig mentions a few lives (but doesn’t spend any time on them) where the main character broke some ribs in an accident. I just feel like there was a really interesting opportunity to explore disability and different perspectives that was missed. It felt like the novel was trying to make a deep and insightful statement about life and the meaning of life, but it ended up feeling trite and obvious. Also I saw the ending coming from like the beginning.
2/5 book-bound lives

The Night Watchman by Louise Erdrich***
Book Hangover Alert**
CW: Missing and Murdered Indigenous Women, sex trafficking, rape, sexual harassment, racism, domestic violence, alcoholism
This book just won a Pulitzer and it deserved it. So good. I love Louise Erdrich. The story is based on the Indian Termination Policy, a policy in the 1950s where the federal government tried to sever all ties with Native nations and stop recognizing tribes with the goal of assimilating all Natives into mainstream American society. Many tribes fought against this policy, including Erdrich’s tribe, specifically her grandfather. The story is a fictionalized account of the Turtle Mountain band of Chippewa Indians’ fight to retain their tribal status and what remained of their lands. The story also followed some of the women of the tribe and explored the issue of Missing and Murdered Indigenous Women, which is still a problem today. I learned a lot from this book.
4.5/5 sleeping bears

Their Eyes Were Watching God by Zora Neale Hurston***
CW: domestic abuse, racism
For some reason I thought this was going to be a slave narrative and I’m not sure why I thought that. But this book is actually set in the 1930s. Hurston’s writing is really gorgeous. There were some really strong images that Hurston created that I’m still thinking about. I just love how everything was described and the way she nested the narrative inside a story on the porch. The way Janie’s character develops throughout the story was really interesting too, how she comes into her self-actualization and is finally able to use her voice.
3.5/5 hurricanes

Let’s Talk About Love by Claire Kann***
We love to see that biromantic, asexual representation! I think I’ve now read 3 books with asexual characters in them and I’m ready to see more! I loved the way Alice was secure in her asexuality but also worked through and explored all her feelings. I also really appreciate that Alice wasn’t white so we got to see the intersection of her race and sexuality. This book was super fun and still read like a YA romance novel, even though there was no sex, which proves to me (but maybe not everyone, idk) that sex isn’t necessary in romance novels (or in romance period).
4/5 on the Cuteness Code

The Mists of Avalon by Marion Zimmer Bradley
CW: incest, religious persecution
Is this 1 book or 4??? I don’t really know. I just know it’s 50 hours in one chunk from Audible. I’ve been listening to it since like January, taking a break between each part and I’ve finally finished it! I really liked hearing the story of Camelot from the perspectives of the women in the story. Bradley manages to give each one a distinct voice and a unique personality where in other versions, Morgaine and Guinevere are pigeonholed into more archetypal roles, and the other female characters are barely mentioned. I do wan’t to mention that Bradley has been accused of pedophilia and sexual abuse which is not in any way okay. We could have a longer conversation about separating the art from the artist and what to do when books we like are written by terrible people, but for now I’ll just say, I believe survivors.
3.5/5 enchanted swords

The Tower of Dawn by Sarah J. Maas***
**Book Hangover Alert
Throne of Glass book 6 of 7
CW: ableism, trauma, war, violence against women
First of all let me just gush over this cover, even though this is totally not the cover of the edition that I got from the library! Look at that badass, handsome man in a wheelchair on the cover of a book! The representation! I could write a whole essay about the intersection of ableism and masculinity in this book, but I won’t put you through that. I really liked this book. I was worried because I had heard that Aelin isn’t in this one, and while I missed Aelin and Rowan, I really enjoyed getting to follow Nesryn and Chaol and watch them develop. I’m not trying to spoil things for people who haven’t read books 1 through 5, but the rest of the review will contain light spoilers. I appreciate that Maas doesn’t make her young characters stay with the first person they fall in love with. It’s unusual in books that characters have several different partners throughout a series until they find the right one, but that’s how it is in real life. The most interesting aspect of this book for me was the way Chaol’s healing and injury were handled. I love how Maas confronted ableism and life as a wheelchair user. The focus really wasn’t on “curing” or “fixing” Chaol of his disability, but on healing his internal trauma and coming to terms with the new limitations of his body and different accommodations he will need. I also loved how Chaol’s mindset changed throughout the book as he faces his own internalized ableism.
5/5 ruks

The Great Alone by Kristin Hannah
**Book Hangover Alert
CW: domestic violence, alcohol abuse, PTSD, death of a parent, cancer, trauma
This book was so good! I got it in a mystery grab bag sale from the library and it was a really good find. I love the way Hannah captures Alaska. I haven’t been there but I think she does a great job of giving Alaska the nuance of being a beautiful but also unforgiving place full of complex people. Speaking of complex people, I love how she creates flawed and believable characters. It was also such a page turner! I couldn’t put it down! Not spoiling the ending but it was perfectly bittersweet.
4/5 ways to die in Alaska

***This book is part of my Books for a Social Conscience series! Read The Night Watchman to learn more about Native issues in the early 20th century to present day. Read Their Eyes Were Watching God for a look at early feminism in the Black canon. Read Let’s Talk About Love to get more LGBTQ+ representation, particularly diverging from lesbian or gay romance. Read The Tower of Dawn for a look at disability and its intersections with masculinity.
Reads marked as part of the Books for a Social Conscience series will regularly address topics like race and racism, colonialism and post-colonialism, LGBTQ+ experience, feminism, BIPOC experience, social and political issues, history, identity, class, disability experience, immigration, gun violence, poverty, colorism, environmentalism, and more! The goal of these books is to diversify the stories we’re reading, grow our empathy for those who are different from us, and amplify voices who are often silenced.