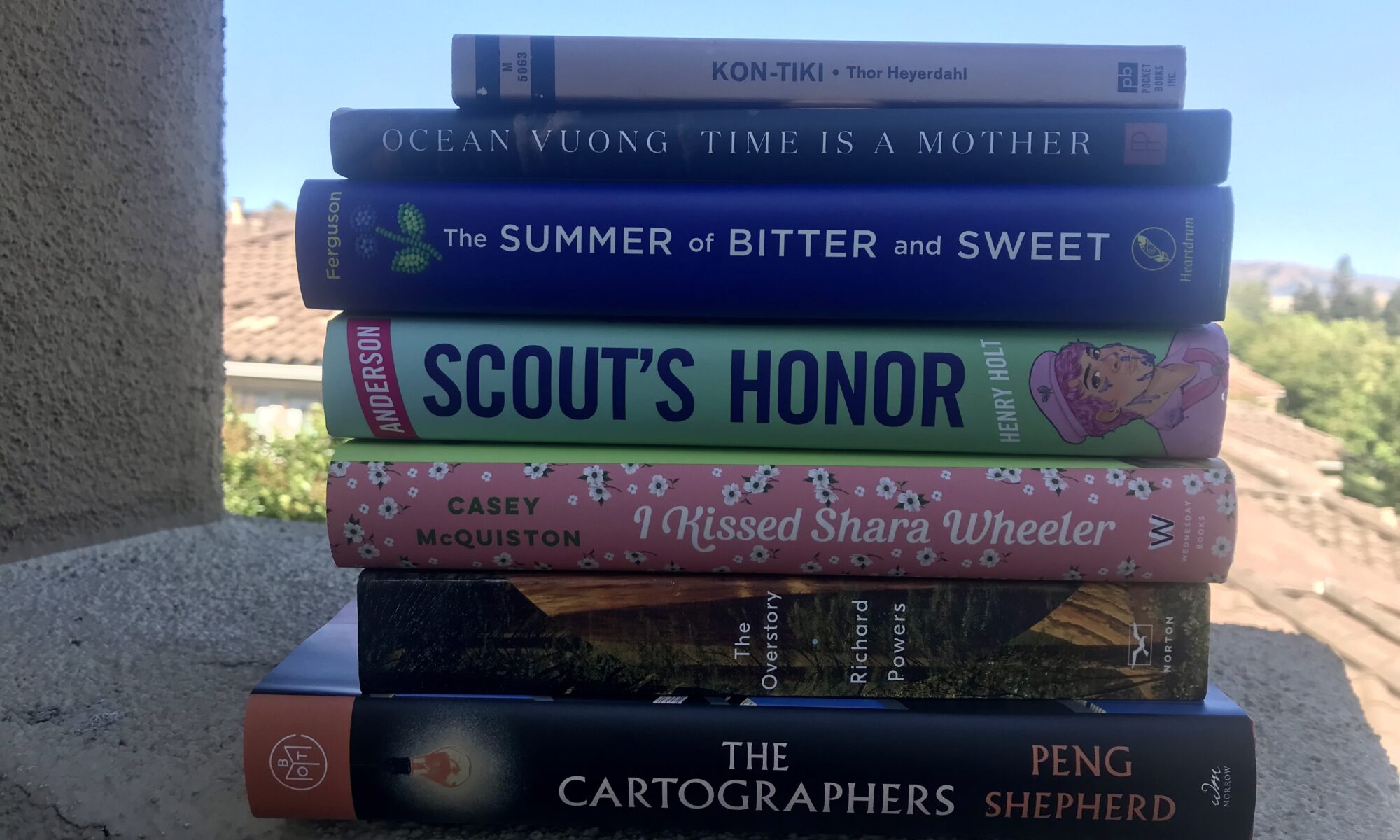 The Cartographers by Peng Shepherd
**Book Hangover Alert
I loved this book. It was my March BOTM pick and I loved the mystery of it and the magic of maps. Shepherd really managed to instill a sense of wonder in the art of looking at and learning from maps. I feel like I appreciate maps in a whole new way now. I also liked the development of Nell’s character and the growth of her found family throughout the story.
4.5/5 gas station maps

Anna Karenina by Leo Tolstoy
There are spoilers in this review. I feel like they aren’t really spoilers because this book has been out for over 150 years, but just in case you want to read it (which I actually don’t recommend) don’t read the spoilers. I’m not sure why I finished reading this book. It’s definitely way too long. And only the parts about Anna Karenina are interesting. I did not care about Levin and how much he liked farming and that he found God in the end (spoiler alert, I guess?). Also, if I had a nickel for every time the death of a horse early in a Victorian novel foreshadowed the death of the leading lady, I’d have two nickels, which isn’t a lot but it’s weird it happened twice (another spoiler, I guess). All in all, you should just watch the Kiera Knightly movie instead, even though Vronsky has terrible hair and a bad mustache.
2.5/5 unfaithful partners

Diary of a Hounslow Girl by Ambreen Razia***
This was an adaptation of a play arranged for Audible. It addressed some important themes for young women, especially young women of color from underprivileged backgrounds. It’s a story of a young woman trying to balance the expectations of her family and cultural roots with finding her own freedom growing up in the UK.
3/5 pretty hijab pins

I Live a Life Like Yours by Jan Grue***
Grue spoke at a panel on disability and creativity at the Bay Area Book Festival which I went to a few weekends ago. I really liked the panel and thought Grue had a lot of interesting things to say, so I went and read his memoir. I like his writing style and how scholarly it was. It wasn’t simply a catalogue of his own experiences, but a story very much in conversation with disability theorists.
3.5/5 wheelchairs

Kon-Tiki by Thor Heyerdahl
CW: racism, unnecessary killing of fish and sharks
This was an old book I think my dad was trying to get rid of but I stole it. It’s a fun adventure story. It is a very “boys will be boys” thing to decide to float across the Pacific in a wooden raft just because no one would publish your theory about how the South Pacific islands were populated. It’s also a very white man thing to say “no, of course there’s no way primitive people from Peru could have sailed all the way to the South Pacific in wooden rafts” even though both Peruvians and Polynesians had stories about people who left before the Inca rose to power and sailed west (Peru’s story), and ancestors who arrived from the east and peopled the islands (Polynesia’s story). But I digress. I enjoyed reading it, even though I had a hard time getting over the author’s torment of sharks for no apparent reason (boredom?) and the fact that they just chucked all their trash into the ocean as they went. I know they’re certainly not the first or the only people to litter in the ocean, but it still annoyed me. It also annoyed me that Heyerdahl felt like he had to mention the skin color of every person they encountered who wasn’t white. It is certainly a product of the 1950s. I also can’t get over that they actually developed film on the raft from their film cameras.
3/5 balsa rafts

Run Rose Run by Dolly Parton and James Patterson
CW: domestic violence, child abuse, human trafficking
This was a solidly average book. It was enjoyable but not special. I liked learning about the music business and I liked how it highlighted the misogyny in the industry, especially in country music. I liked the full cast audio recording, especially as Dolly Parton reads one of the characters. I did feel like there were some story threads that were dropped and never got resolved, and I would have appreciated being able to solve at least parts of the mystery on my own as a reader before we were just told at the end. I liked that Annie Lee was trying to be a strong independent woman, but it got annoying that she would never ask for help and needed rescuing in the end.
3/5 guitars

The Overstory by Richard Powers***
**Book Hangover Alert
I’m still not really sure I’ve processed this book. It was really good. But I wouldn’t necessarily say it was enjoyable to read. It’s about trees. About forests and about ecosystems and about sentience that humans have no right to destroy. It will probably change the way you think about trees and it will probably make you very sad about deforestation, like it made me. But there is a grain of hope at the end? That I might not ever live to see?
4/5 redwoods

Victories Greater Than Death by Charlie Jane Anders***
CW: genocide, fantasy racism, transphobia (mentioned)
This was exactly what I hoped it would be: a queer escapist space fantasy. I loved the focus on strong friendships and bodily autonomy and consent. I loved that every character shared their pronoun in their introduction and I loved that all the characters asked for permission before they touched each other. It was a fun read and I’m excited to read the rest of the series. My only real criticism is that I wish fewer of the aliens had died and that more aliens had gotten to be major characters, apart from the Earthlings.
3.5/5 universal translators

I Kissed Shara Wheeler by Casey McQuiston***
CW: homophobia, religious trauma
This one was fun. I picked it up at the Bay Area Book Festival after I heard McQuiston speak on a panel, and I also got it signed! I don’t think I liked it quite as much as McQuiston’s first two books, but it was still a fun read. I liked the exploration of queerness in the context of a small southern town and a religious school.
4/5 pink notes

The Distance Between Us by Reyna Grande***
CW: alcoholism, PTSD, domestic violence, child abuse, neglect
A memoir of a young immigrant from Mexico trying to make her way in the United States. This isn’t an easy story to read. Grande has faced a lot of really difficult struggles. But in her story we can learn more about immigrant experiences and the realities of the ever elusive American dream.
3.5/5 first generation college graduates

Scout’s Honor by Lily Anderson
CW: PTSD, death
This book was fun! It was exactly the monster-killing, sisterhood vibes I was hoping for. I really appreciated that the main character was struggling with trying to decide whether to be a part of a toxic organization and try to change it from within, or to quit and get out of that space. I relate to that struggle. There were just a couple things I didn’t like as much. I do resent a little bit all the insinuations that Girl Scouts just sell cookies. I also thought it was gross that the author kept pointing out whenever Kelsey slurped spit off her braces. While this is a believable character trait, it’s gross and I don’t want to read about it. There were a couple of sections of the book inexplicably in verse and I feel like it was necessary or really added anything, but overall I enjoyed it.
3.5/5 mulligrubs

Time Is a Mother by Ocean Vuong***
**Book Hangover Alert
Who gave Ocean Vuong permission to write like that? This is his third book, second poetry collection, and I think it’s his strongest. He’s always been amazing but he’s just getting better. Favorites include “Beautiful Short Loser,” “Dear Sara,” “The Last Prom Queen in Antarctica,” and “Woodworking at the End of the World.”
4/5 ants on the page

The Summer of Bitter and Sweet by Jen Ferguson***
**Book Hangover Alert
CW: see Author’s Note at the beginning of the book
I adored this book. I bought it after hearing Ferguson speak at the Bay Area Book Festival and the only regret I have is that I didn’t get it signed by her. We love that Native and asexual representation so much. This book was just so well done, I don’t even know what to say. I loved the characters; I loved the struggle of balancing your identity with what other people want you to be; I loved the sense of community and the focus on the land. Also I just really want to eat all the ice cream described in the book.
5/5 reds

***This book is part of my Books for a Social Conscience series! Read Diary of a Hounslow Girl to learn about balancing cultural and familial expectations with finding freedom and identity. Read I Live a Life Like Yours to learn more about disability experience through a non-American lens. Read The Overstory to grow your empathy for trees, the earth, and the environment. Read Victories Greater than Death for a diverse sci-fi story. Read I Kissed Shara Wheeler for an exploration of queerness in the context of a small, southern, religious town. Read The Distance Between Us to learn about the immigrant experience. Read Time Is a Mother to learn more about AAPI and LGBTQ+ experience. Read The Summer of Bitter and Sweet to learn about Native and asexual experience.