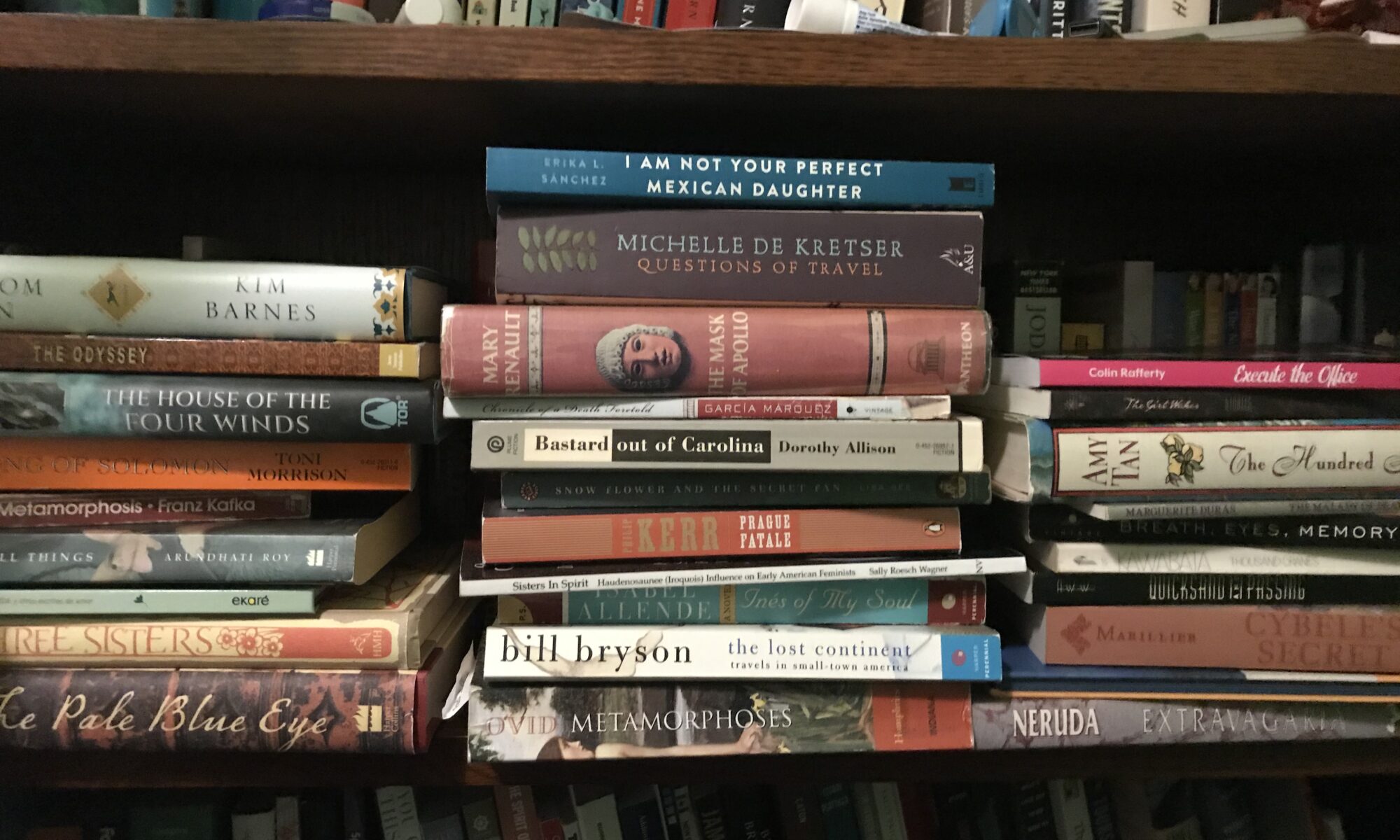 Norse Mythology by Neil Gaiman
Neil Gaiman is my favorite author. And it’s been ages since he released a novel. I decided to reread some of his books. I’d only read this one once so it moved to the top of the list. I love mythology of all kinds, but I’m not as familiar with Norse mythology as I am with other pantheons, so it was nice to read again, especially since I’ve recently been watching all the Marvel movies. I do love that the original myths are significantly more weird than the versions in the MCU.
4/5 monstrous children of Loki

The Sword of Summer by Rick Riordan***
Magnus Chase and the Gods of Asgard book 1 of 3
CW: ableism, child abuse, anti-Muslim sentiment
I wanted to read the rest of this series but I realized I didn’t remember this first book well enough so I read it again. I enjoyed it perhaps even more than I did the first time. It was especially nice because I had just reread Norse Mythology so I was all brushed up on my myths. I love Rick Riordan. I love how inclusive his books are. I think this is the first book I’ve read with a Deaf character who uses ASL. I’d love to talk to someone from that community to see if they thought he did a good job, but to me it seemed like he did his research.
3.5/5 angry World Tree squirrels

Song of Solomon by Toni Morrison***
CW: anti-Black racism, alcoholism, colorism, violence, sexism, incest, ableism
I was so pleased when I got this book in a mystery book grab bag sale from my local library. I’ve been meaning to read more Toni Morrison. Morrison is definitely a national and literary treasure. I’m just awed by her literary craft. But that’s not to say I didn’t have to check Sparknotes to learn about all the biblical references I missed. I did enjoy reading this book, but I also wish I had a book club or an English class to discuss it with. It’s one of those books that I don’t feel like I can get as much out of it reading it alone. Morrison does use ableism as a literary device, which is pretty common, especially in older works, but I wish it wasn’t. One of Milkman’s legs is shorter than the other, indicating he’s morally stunted. By the end of the book, when he’s grown up and matured and overall become a better person, the disability goes away. These tropes are harmful to the disabled community.
3.5/5 pairs of gossamer wings

The Lost Apothecary by Sarah Penner
Book Hangover Alert**
This was my March Book of the Month book. Fabulous. Loved it. Couldn’t put it down. I loved that it was full of interesting and unique female characters. I loved the way it built tension so seamlessly throughout. I loved the way it weaved forward and back through time to tie the fates of several women together. The only thing I didn’t love was the way Nella’s disability was characterized. Nella has some sort of degenerative disease and she believes it’s because she sells poisons and many people have died as a result. This plays into the classic stereotypes in literature of people who are morally corrupt having a physical disability as a mark from God that they are not good people (see what we discussed above with Song of Solomon). Which is obviously harmful to the disabled community. Now, Nella does mention that her mother died of a similar disease, which implies that maybe it’s more of a genetic disease, as Nella’s mother only sold cures, no poisons. And maybe it would make sense for Nella to believe that her disease is a punishment for her sins, since she lives in 18th century London, where those views would be prevalent. But since the disabled community is still discriminated against today, it’s tricky to play into that stereotype without it seeming harmful.
4.5/5 bottles of poison

The Mask of Apollo by Mary Renault
I got this book as a mystery book subscription from the local bookstore in Frederickburg, which I did for a while during the beginning of the pandemic when I could afford it. Reading this book was kind of like getting thrown into 4th century Greece and being told to swim. Renault’s world building and all the research she must have done were stunning. I liked reading about Niko and the Greek tragedies, and I appreciated that even though she wrote the book in the 1960s, she didn’t shy away from portraying the acceptance of queerness in ancient Greek culture. (Though there was a lot of unresolved sexual tension between Niko and Dion.) But I did feel I was in over my head when reading about the politics of the time.
3/5 mysterious masks

A Promised Land by Barack Obama***
CW: anti-Black racism
Former President Obama is such a remarkably intelligent and thoughtful person. It was really nice to read more about his start in politics through his first term in office. It was interesting to learn more about many of the events that took place just as I was beginning to become politically aware. Obama does a great job addressing the complexities of every difficult situation and decision that a president has to make. I liked hearing about his climate policy and how difficult it was to pass the ACA. The whole book did frustrate me a little though, because it is full of so much hope and it’s impossible not to think about where we might be today if we hadn’t had 4 years of Trump after the Obama years. I do think maybe he could’ve trimmed it down a little though. I did enjoy listening to Obama read the audiobook.
3.5/5 presidential dogs (Rest in Peace Bo)

King of Scars by Leigh Bardugo
King of Scars Duology book 1 of 2, Grishaverse
CW: suicide, child abuse, child marriage
I’m sure everyone is watching Shadow and Bone right now, and isn’t it fabulous? I really enjoyed the Shadow and Bone series and the Six of Crows duology, so I was excited to read King of Scars. I love Bardugo’s world building and her characters, and I love that we get to keep visiting the Grishaverse from different perspectives. Bardugo is so clever with her plots and storylines and you’re always on your toes, desperate to know what happens. I also appreciate that she includes disabled characters and it’s not a big deal.
MILD SPOILER AHEAD: I guess the only thing I don’t love is villains who just keep coming back and are super hard to kill. I think it gets a little tiresome.
4/5 saints

***This book is part of my Books for a Social Conscience series! Read The Sword of Summer to see people of different abilities and backgrounds represented in fantasy. Read Song of Solomon to experience a classic of Black literature and American literature. Read A Promised Land to get a better idea what it was like to be the first Black president and to understand all Obama did for America.
Reads marked as part of the Books for a Social Conscience series will regularly address topics like race and racism, colonialism and post-colonialism, LGBTQ+ experience, feminism, BIPOC experience, social and political issues, history, identity, class, disability experience, immigration, gun violence, poverty, colorism, environmentalism, and more! The goal of these books is to diversify the stories we’re reading, grow our empathy for those who are different from us, and amplify voices who are often silenced.