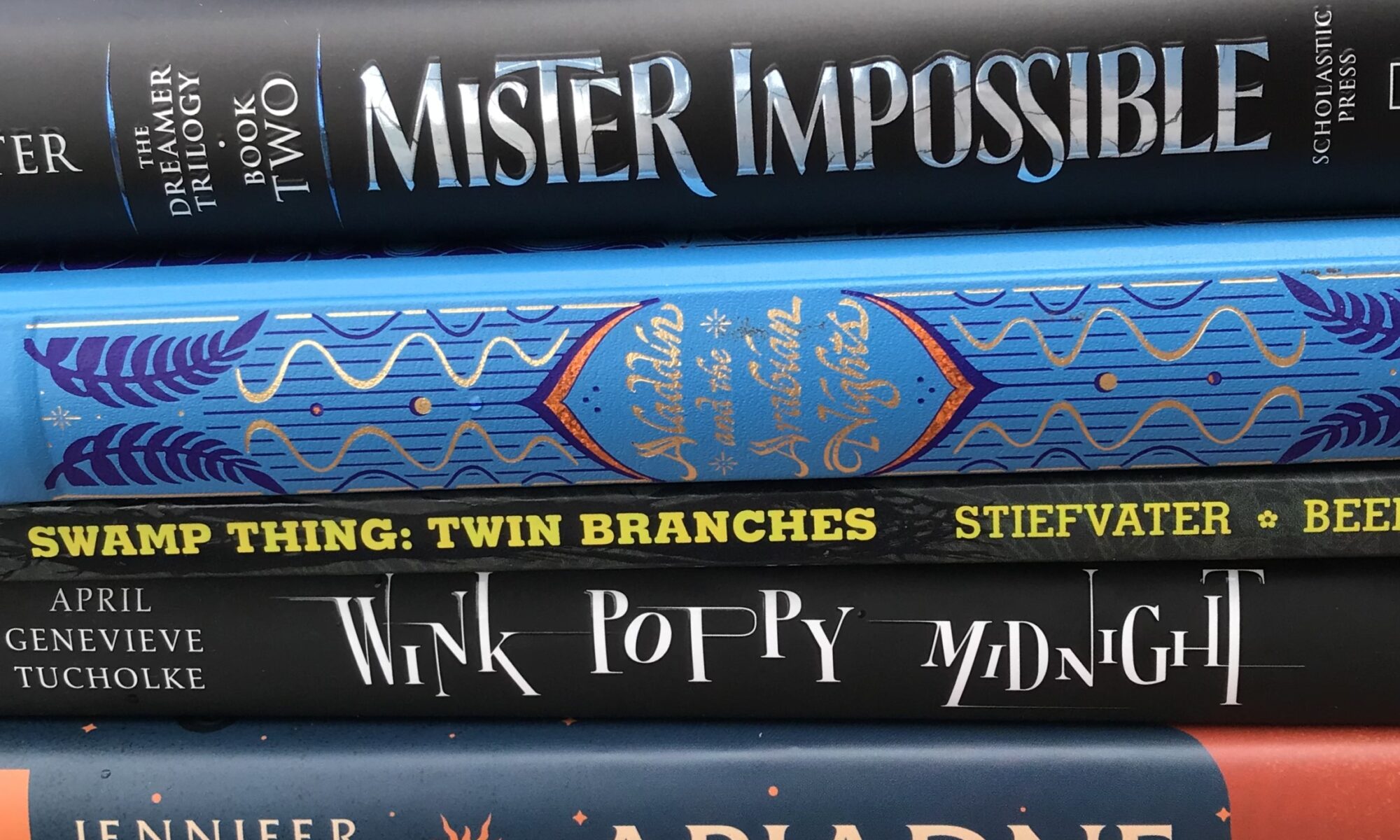 The Hammer of Thor by Rick Riordan***
Magnus Chase and the Gods of Asgard book 2 of 3
CW: child abuse, ableism
I don’t know why Uncle Rick can’t give anyone in the Magnus Chase series a non-traumatic backstory or a happy family life. But anyway I’m glad the characters all found each other. We also love to see that representation: a Deaf character, a gender-fluid character, Muslim characters. I’m not going to do much of a review because I don’t want to give away any spoilers. I’m definitely really enjoying this series and I’m excited to read the last one!
4/5 trickster giants

Swamp Thing: Twin Branches by Maggie Stiefvater
This is Maggie Stiefvater’s first graphic novel. It’s fun and I love the art. It is a bit short; I would have happily read a much longer version. I will say though, that one of my favorite things about Stiefvater’s writing is her descriptions. Of course we get the art in the graphic novel, but it is a shame to lose her exceptionally well crafted descriptions in favor of just dialogue.
3/5 definitely dangerous experiments

Mister Impossible by Maggie Stiefvater
Book Hangover Alert!**
The Dreamer Trilogy Book 2
CW: suicidal ideation
The Raven Cycle is one of my favorite series and I also adore the first 2 installments of The Dreamer Trilogy (who doesn’t want more Ronan Lynch???). I loved getting to read about art and art history with a magical twist. I also enjoyed the focus on environmental issues and how there were no simple solutions. I still love Stiefvater’s writing style. And her characters. And the magic. And just the whole plot. I don’t want to say too much about it because I don’t want to spoil it, but there is one thing I want to acknowledge for those who have read it.

Aladdin and the Arabian Nights
CW: anti-semitism, racist/stereotypical drawings, domestic violence
I really enjoyed getting more familiar with these fairytales. Some of them I had heard before, but many I had not. I liked how many of them were sort of like nesting dolls, feeding into each other, and all were nested in the tale of Sheherazade. I have a really lovely illustrated copy of the tales, but I was frustrated that the illustrations were really stereotypical, depicting most of the middle easterners as ugly, dark-skinned barbarians, with the exception of virtuous women, who were fair-skinned, and virtuous youths (heroes like Aladdin), who were also fair-skinned.
3/5 magic carpets

Fifty Words for Rain by Asha Lemmie***
CW: attempted suicide, physical, mental, and sexual abuse, anti-black racism
This was recommended to me by a friend and it left me with a lot to think about. The book is set in Japan in the 1950s and 60s and tells the story of a biracial girl born to a Black American and a Japanese woman from an influential, Imperial Japanese family. It was really interesting to read about racism in Japan, because I feel like most of the books I read that deal with racism are set in the US. I loved seeing Nori develop throughout the story into a self-actualized woman with her own voice. I was also impressed by the complex depiction of Nori and Akira’s sibling relationship. I still don’t know how I felt about the ending. I feel like I wasn’t totally satisfied with Nori’s choice, but I also feel like that is at least in part because I come from America and a very individualistic culture. I think those from collectivist cultures, like many Asian cultures, would empathize more with the ending. But I’d love to hear other people’s perspectives.
3.5/5 music lessons

Death Masks by Jim Butcher
The Dresden Files book 5 of 17
Another solid installment. I am quite impressed that Butcher can write them so consistently; there’s none of the wavering in quality that you sometimes see in other series (or not yet, anyway). I will say, these books are definitely written by A Man (TM). I don’t know what straight men’s obsession with nipples is. Personally, I don’t find them particularly sexy, but male writers will never miss an opportunity to point them out. I would also just like to say that no matter how cold it is, there are some fabrics that you will never be able to see nipples through, even if she’s not wearing a bra. Heavy kimono silk is one of them.
3.5/5 religiously magical objects

Lore by Alexandra Bracken
Book Hangover Alert**
CW: discussion of child marriage, violence, gore, ableism
This book is like the Purge + Greek gods in New York City. I thoroughly enjoyed it. It was very hard to put down. The banter was top notch. I liked the characters and I really liked the brutal depictions of the Greek gods. Myths tell us that the gods weren’t good people, but I think people still tend to romanticize them a lot.
4/5 bronze masks

Ariadne by Jennifer Saint
CW: suicide, murder of children
This one is also about Greek mythology because apparently I’m obsessed. Ariadne was my Book of the Month for May. It was good, but also very sad. Though, to be fair, if I had known more about the myth of Ariadne, I might’ve known that going in. Something I really liked about this book was the contrast between the sisters Ariadne and Phaedra. Often in books the female characters aren’t very fleshed out and are very similar to one another. I also feel like when we see feminist characters, we sort of get this idea that there’s only one way to be a feminist, and I really loved the way Ariadne and Phaedra embodied different ways of being a feminist. Though, I also don’t think either of them was able to fully actualize herself, not necessarily through any fault of her own, but more as a result of the repressive and misogynistic society they live in.
3.5/5 cups of wine

Wink Poppy Midnight by April Genevieve Tucholke
CW: manipulation, abuse, suicidal ideation
This was an odd, charming little book. It’s a little fairytale, a little thriller, a little romance, a little mystery. I really liked the characters and the writing style. It was super easy and quick to read, but the images were really strong and evocative. Its ending was just the right mix of bitter and sweet and satisfying.
3.5/5 Orphans

The House of the Four Winds by Mercedes Lackey and James Mallory
One Dozen Daughters Book 1
I enjoyed this one. It was another that I got in a mystery grab bag sale from the library. But I always love a good pirate/sailor tale, especially if the the female lead is pretending to be a man. I appreciated that the story wasn’t easily predictable, but I did wish Clarice got to do a bit more sword fighting. The world building was a little weak, just in that it’s set in our world basically, just with all the countries renamed and with some magic. I guess they just didn’t want to make it a historical fiction. I just noticed that it’s listed as One Dozen Daughters book 1. Can we safely assume that there are or will be 11 more books covering Clarice’s sisters?
3.5/5 pieces of enchanted treasure

The Feline CEO by Lynn Maria Thompson
Thompson’s slim book is all about how to make yourself the best CEO you can be, using the wisdom of the cat to change up the way you’re thinking. Not a CEO? Much of the advice, including confidence, presenting yourself well, getting plenty of sleep, eating well, viewing the big picture from up high, are useful for everyone’s daily life. The book also comes with online exercises and bonus material to help readers change the way they’re thinking and apply feline wisdom to their lives. I did think the metaphors were a tad strained at times, but overall the advice seemed sound, though I am not a CEO, so I can’t speak to that specifically.
2.5/5 cats

***This book is part of my Books for a Social Conscience series! Read The Hammer of Thor to get some great representation of different kinds of people in fantasy. Read Fifty Words for Rain to learn about racism in Japan.
Reads marked as part of the Books for a Social Conscience series will regularly address topics like race and racism, colonialism and post-colonialism, LGBTQ+ experience, feminism, BIPOC experience, social and political issues, history, identity, class, disability experience, immigration, gun violence, poverty, colorism, environmentalism, and more! The goal of these books is to diversify the stories we’re reading, grow our empathy for those who are different from us, and amplify voices who are often silenced.