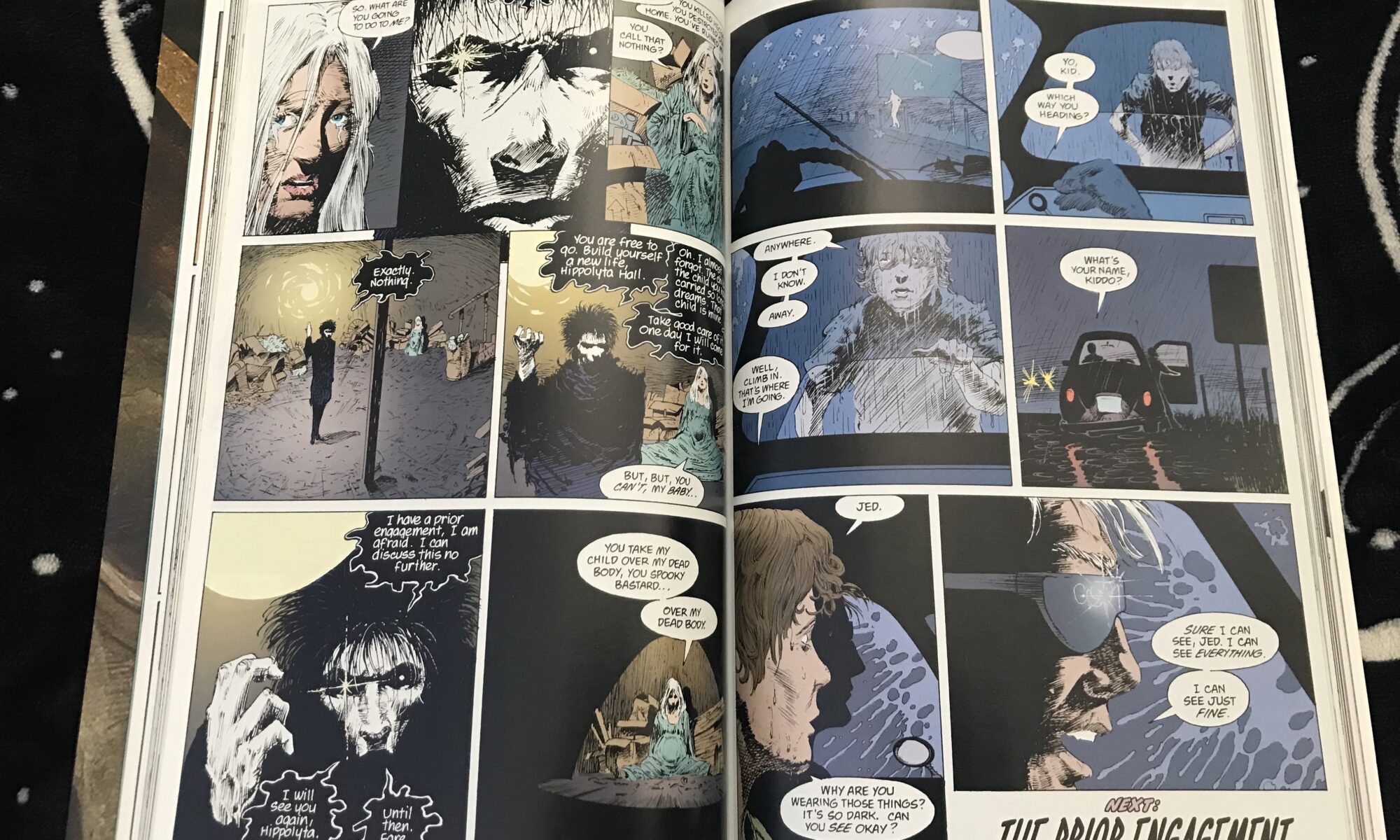 The House on Mango Street by Sandra Cisneros***
CW: rape, sexual harassment
I read parts of this book in high school and read the whole thing in college. Now I’m volunteering with a 9th grade English class and they’re reading this book so I read it again. Cisneros is just such a beautiful writer. Her prose is simple and clean, but so poetic and evocative. It’s easy to read but there’s so much going on under the surface. It’s still magical even after reading it several times.
4/5 houses

The Doll’s House by Neil Gaiman
Sandman Vol 2
CW: violence, gore, serial murder
I don’t know whether to put this in new books read or in books reread. I listened to the Audible radio play of Sandman which goes through the first 3 volumes I believe. I had read the first volume of the comics when I listened to it but no more. So when I read this volume, the story was familiar, but the illustrations were new to me–and since Sandman is a comic, the illustrations are pretty important.
3.5/5 “cereal” killers

The True Confessions of Charlotte Doyle by Avi
If you read my post on my favorite stand alone novels, this book was in there. I first read this book when I was younger and really enjoyed it. Reading it again I didn’t remember very well what had happened but I still really enjoyed it. I loved that Charlotte develops so much over the course of the book and that she’s such a strong female character. One thing that bothered me that I don’t remember noticing when I was younger was how cowardly the crew was. They never spoke up against the captain or for their peers. It also strikes me as an allegory for how the upper classes keep control of the working classes. There are a lot more of the working classes than there are of those in power, but by keeping the working classes divided and suspicious of each other, those in power keep them from organizing against the power structures. Anyway, if they had worked together from the beginning, they could have solved their problems faster.
4/5 round robins

Half Sick of Shadows by Laura Sebastian
This was my book of the month for June (I’ve gotten a bit behind reading my BOTM picks), and I enjoyed it. I maybe shouldn’t have read it almost back to back with The Mists of Avalon as that led to a lot of comparison between the two. I don’t really know what (if anything) is “canon” as far as the story of King Arthur goes but it interests me that the kinship ties in each version I’ve encountered are different. Like in The Mists of Avalon, I liked the feminist spin on the King Arthur tale, centering the story on Elaine this time instead of Arthur or Morgana/Morgaine. I also appreciated how Sebastian characterized Guinevere, who we so rarely get to see as anything but a pious and subservient queen turned seductress. Even in The Mists of Avalon, though she’s a rounded character, she isn’t much of a feminist. I also really enjoyed the way Sebastian wove the story forward and backward in time using Elaine’s visions of various futures. She created a really delicious tension between Elaine and the fate she was trying to control. And finally, I love the way all three women, Elaine, Guinevere, and Morgana, were able to forge their own path despite the seemingly inevitable futures laid out for them.
3.5/5 fateful visions

The Firekeeper’s Daughter by Angeline Boulley***
**Book Hangover Alert
CW: gun violence, rape, drug trafficking, drug and alcohol abuse, Missing and Murdered Indigenous Women, racism
This book was so good; it was really hard to put down. I loved it, but it was pretty intense, so don’t go for it if you’re looking for something light. I loved the way Boulley represented her Native culture and practices. I also loved the sense of community with the Elders; there are a couple of scenes of the protagonist and the Elders that I just keep thinking about and they make me feel all warm inside every time I do. I learned a lot about being enrolled as a tribal member, prejudices within tribes, casinos, and the meth epidemic. One more thing I want to mention: I always hate when books have titles like “The [insert profession of a man]’s Wife/Daughter/Sister” because the woman is totally defined by her relationship to this man, however this book makes a point of discussing this and linking it to a Native story that the protagonist rejects because the woman doesn’t get her own name. So I love that self-awareness.
4.5/5 suspicious hockey pucks

A Discovery of Witches by Deborah Harkness
All Souls Trilogy book 1 of 3
I was disappointed by this book. I was really interested in the history and the alchemy and the magic and the mystery of the manuscript, but then Harkness had to go and ruin it with this overblown romance with a vampire. Personally I think vampires are a bit overrated. Sure he’s super handsome and strong, but he’s also super problematic. Why can’t anyone write a progressive vampire for once? Matthew’s misogyny, his controlling tendencies, his annoying overprotectiveness, and his anger issues are excused because he’s been alive for 1500 years (things were different back then, men treated women differently in those days) and because he’s a vampire (he can’t resist his predatory instincts–*big eye roll*). C’mon, the dude’s been alive for 1500 years, he couldn’t have gone to therapy in all that time to work through this stuff? Anyway, the romance really did not do it for me (also, who thinks being touched and kissed by cold hands and lips is a turn on?). I did read the whole thing because I was hoping to find out more about the mysterious manuscript and the secret of Diana’s parents’ murder. Then I realized it’s the first book in a trilogy so while we found out some answers, we didn’t find out all of them. I won’t be reading the rest of the books.
3/5 objects from the past

Conflict Resolution for Holy Beings by Joy Harjo***
Joy Harjo is the current Poet Laureate of the United States, serving in her second term. Some of her books including this one are available to Audible members for free so I definitely recommend listening to them. She also reads her own poetry in this one which is always nice to hear a poet reading their own work. I do wish I could both read and listen to the poems because that’s how I best understand poetry but I did really enjoy listening to Harjo’s work. I liked the way she sort of sang some of the poems, reminiscent of some tribal music.
3.5/5 holy beings

***This book is part of my Books for a Social Conscience series! Read The House on Mango Street to learn more about Chicana experience. Read The Firekeeper’s Daughter to learn more about Native communities and values, and the affects drug trafficking and MMIW have had on those communities. Read Conflict Resolution for Holy Beings to celebrate the poetry of the US’s first Native Poet Laureate.
Reads marked as part of the Books for a Social Conscience series will regularly address topics like race and racism, colonialism and post-colonialism, LGBTQ+ experience, feminism, BIPOC experience, social and political issues, history, identity, class, disability experience, immigration, gun violence, poverty, colorism, environmentalism, and more! The goal of these books is to diversify the stories we’re reading, grow our empathy for those who are different from us, and amplify voices who are often silenced.