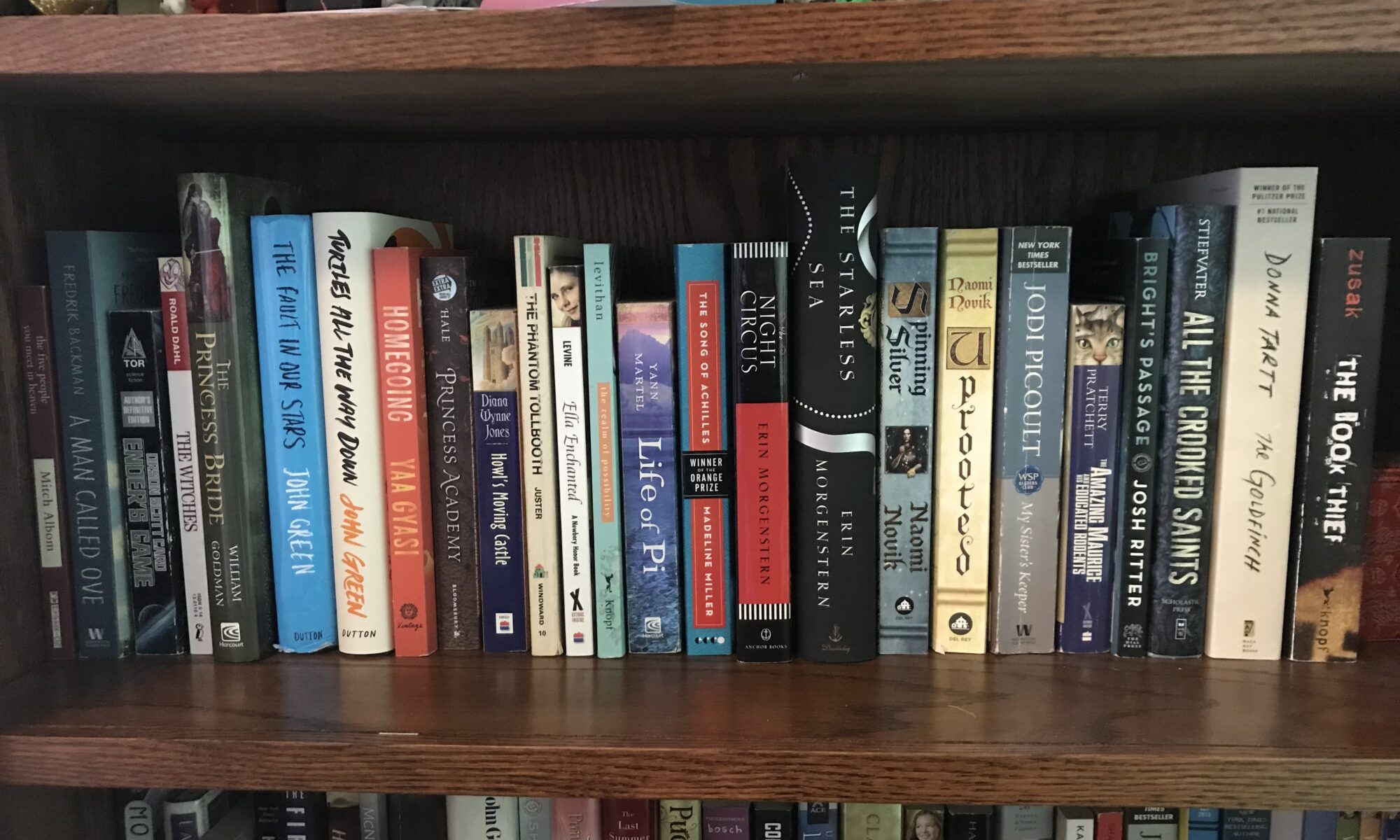 It’s the Book Blog’s 1 year anniversary! I’ve been keeping a spreadsheet of what I’m reading since I was in high school, but I’ve really enjoyed writing a more complete review of every book I read and sharing it on my blog. I hope you’ve been enjoying it too! I’ve put together this special post of my favorite books to celebrate the first anniversary of the Book Blog. Here’s to many more!

This list only includes stand alone novels. I’ll post my list of favorite series sometime in the future. Since it’s a long list, I won’t write a full review for each one. It is safe to say that all of these books are Book Hangover kind of books.

What are your favorite books?

The Ocean at the End of the Lane by Neil Gaiman
Neil Gaiman is my favorite author and I adore all his books, but I limited myself to these two for this post. A family of remarkable women. A pond that is also the world.

Cloud Atlas by David Mitchell
Six interlocking stories that explore reincarnation and the echoes of lives through time. Every bit as wonderful as the movie and full of so much more.

The Bone Clocks by David Mitchell
David Mitchell is probably my second favorite author, and like Neil Gaiman, I love all his books, but I just picked two for the post. Everyone is reincarnated, but some souls remember. Mind-bending.

The Book Thief by Marcus Zusak
In World War II Germany, a family shelters a Jew and a little girl steals books from pyres.

The Goldfinch by Donna Tartt
When a terrorist attack destroys part of the Met and kills his mother, Theo walks out of the gallery with a painting under his arm. Now what?

All the Crooked Saints by Maggie Stiefvater
A saint in the desert performs miracles. But what does a miracle cost?

The Scorpio Races by Maggie Stiefvater
The pony swim at Chincoteague Island if it had demon murder horses.

Bright’s Passage by Josh Ritter
He’s a singer, he’s an artist, he’s a novelist. There’s nothing Josh Ritter can’t do. A young man, his baby, an angel, and memories of the war.

Amazing Maurice and His Educated Rodents by Terry Pratchett
The Pied Piper was a scam and Maurice the cat was in charge. Hilarious. Truly a gem.

My Sister’s Keeper by Jodi Picoult
One sister is dying from leukemia. Another sister is genetically modified to be her match. What if you were born to save your sister? Sad, thought provoking.

Uprooted by Naomi Novik
A wizard takes a young woman from the village every 10 years in exchange for protecting the village from the Wood. But Agnieszka will be the last girl.

Spinning Silver by Naomi Novik
The tale of Rumplestiltskin as you’ve never seen it before.

The Song of Achilles by Madeline Miller
The Trojan War from the perspective of Patroklus. Gay and slaps.

Circe by Madeline Miller
The story of Circe, the witch on the island who turns Odysseus’s men to pigs. But her story doesn’t end there.

Life of Pi by Yann Martel
A boy and a tiger on a lifeboat in the middle of the ocean.

The Realm of Possibilities by David Levithan
A mosaic of poems that tells the stories of a group of high school students. Beautifully written.

Ella Enchanted by Gail Carson Levine
The perfect fantasy book. Cinderella, if Cinderella had to obey any direct command she was given.

The Phantom Tollbooth by Norton Jester
A treat for anyone who loves words. A boy receives a mysterious tollbooth and goes on an adventure.

Howl’s Moving Castle by Diana Wynn Jones
Rather different from the Ghibli film, but just as delightful. A wizard, a young woman under a spell that makes her an old woman, a witch, a fire demon.

Princess Academy by Shannon Hale
The perfect princess book. Young women competing to catch the eye of a prince actually learn to love and support one another.

Homegoing by Yaa Gyasi***
Two sisters. One a princess in Ghana, one sold into slavery bound for the United States. Two diverging family lines followed through history to the present day. Exquisite.

Turtles All the Way Down by John Green
A meditation on mental illness.

The Fault in Our Stars by John Green
Beautifully tragic. Two teens with cancer fall in love.

The Princess Bride by William Goldman
Quirky, funny, odd, just like the movie.
I reviewed this one in the July 2020 Book Blog.

The Witches by Roald Dahl
A classic.

The Martian by Andy Weir
A man gets stuck on Mars alone and has to figure out how to survive until he can be rescued.

The Five People You Meet in Heaven by Mitch Albom
There was a time when I would finish this book and just start it over again. Easily the best book Albom has ever written (don’t read the sequel; not good). Introspective, poignant, lovely writing.

The Hate U Give by Angie Thomas***
After witnessing a cop shoot her friend, a young Black woman learns to use her voice.

With the Fire on High by Elizabeth Acevedo***
A teenaged mother with a flair for flavor and a talent for fine cooking.
I reviewed this in the July 2020 Book Blog.

The Seer and the Sword by Victoria Hanley
A princess who is also a seer. A warrior who is a former slave. Friendship, love. Simple, neat storytelling.

The City we Became by N. K. Jemisin***
What if cities were people? What if New York City was several people? Stunningly well captured.
I reviewed this on in the December 2020 Book Blog.

Red, White & Royal Blue by Casey McQuiston***
Gay and slaps. Son of the US president falls for the Prince of Wales. A secret love that can’t be kept secret.
I reviewed this in the January 2021 Book Blog.

I cut myself off but I wanted to keep going.

***This book is part of my Books for a Social Conscience series! Read Homegoing to learn more about the African diaspora and the effect of slavery. Read The Hate U Give to learn more about police brutality. Read With The Fire On High to see a new side of teenaged pregnancy. Read The City We Became to appreciate the diversity that makes New York the magical place it is. Read Red, White & Royal Blue for a lovely, happy, queer romance.
Reads marked as part of the Books for a Social Conscience series will regularly address topics like race and racism, colonialism and post-colonialism, LGBTQ+ experience, feminism, BIPOC experience, social and political issues, history, identity, class, disability experience, immigration, gun violence, poverty, colorism, environmentalism, and more! The goal of these books is to diversify the stories we’re reading, grow our empathy for those who are different from us, and amplify voices who are often silenced.